Because my blog entry a few weeks ago on olive leaf and blood pressure was so well-received, this week I’ve decided to examine the effect of hawthorn (Crataegus spp) on blood pressure. Call it an ongoing series if you like, but there will likely be further articles on hypertension as time goes on. Of course, as with most chronic disease, it’s not drugs, herbs or supplements that solve the problem, it’s diet and lifestyle that create and can resolve the problem. With a few exceptions, interventions don’t fix the problem, they help patients along while they are doing the work that will fix things in the long run. That said, let’s dive in.

Hawthorne is, of course, a well known herb used for heart problems, including congestive heart failure, angina, and mild arrhythmias, among others. Its main active constituents are antioxidant flavonoids, including quercetin, proanthocyanidins, and a number of other glycosides. Without going into the biochemistry of hawthorn, it acts primarily by increasing blood flow to the heart and improving its pumping action. For these reasons, it’s largely used for heart-specific pathology. Even so, evidence surrounding hawthorn’s effect on hypertension is interesting, though limited to say the least.

A study of lab rats found that an extract of Crataegus tanacetifolia leaf was effective in preventing artificially-induced hypertension. As in the animal study from the article I wrote on olive leaf, I find this study interesting, but not compelling. Artificially-induced hypertension in animals is very different from lifestyle-induced hypertension in humans, and so while this study warrants additional research, it shouldn’t be taken as warranting clinical advice. Additionally, most commercially available (or professionally available) hawthorn preparations are made from Crataegus monogyna, oxyacantha or laevigata, different species from the one used in this study, and most of those preparations are made primarily if not exclusively from berry, not leaf, extracts. While there’s undoubtedly some crossover in terms of active constituents, we can’t guarantee that.

Fortunately, human studies are out there, and I was able to find two randomized control trials in the literature. One was a small pilot study done in the UK, which had four study arms, one taking hawthorn alone, one taking magnesium alone, one taking hawthorn and magnesium, and one placebo arm. A trend towards lower diastolic blood pressure was noted in the hawthorn group, but no statistically significant findings were made. The authors noted that the dose of hawthorn was low (500 mg per day), and that as such it may have influenced the findings. The authors called for future studies to use higher doses in order to create more pronounced effects.

Even though the effect of Crataegus was limited in these studies, I think further research into this herb as a potential treatment for hypertension is warranted. As noted, the first study was performed using a dose of hawthorn that was very low – only 500 mg – and that higher doses are necessary to achieve a therapeutic effect. In the second study, significant changes were noted, but the effect was still small, despite larger doses. I don’t think that this means we should dismiss hawthorn as only mildly effective – the study was done on diabetic patients, many of whom were on antihypertensive medications (an average of 2.5 antihypertensive medications each), and Crataegus’ mechanism of action would likely have overlapped with these medications. Hawthorn is known to block the ACE enzyme, influence calcium activity in heart cells, and have a mild diuretic action – three of the primary mechanisms of antihypertensive medications. Hawthorn’s action would therefore have been a light push against biochemical pathways that were already being forcibly opened. I’d like to see future studies done using high doses of hawthorn as a primary treatment for hypertension, to see if stronger effects can be observed.

One final piece before I sign off for the day, and the one that really has me thinking about the therapeutic benefit of hawthorn – in my searching, I was pleased to find a great article on the use of hawthorn in hypertension that was published in the British Medical Journal in November of 1939. Not only is the article full of great archaic medical terms (‘morbid conditions of the chest’ being one), but it harkens back to a time when herbal medicines were used to treat conditions now seen rarely by naturopathic physicians or other CAM practitioners. The article discusses the use of Crataegus in 10 cases of hypertension – severe hypertension, which would make many docs on both sides of the aisle whimper – and notes changes in systolic blood pressures of 50+ mmHg, and changes in diastolic blood pressure of 30+ mmHg. It’s easy to dismiss these old articles as being the subject of selective reporting, or poor testing procedures, but I for one think that there’s something behind these findings that deserves attention. The dose of hawthorn used is quite high, something that’s perhaps been missing from the more recent studies.

The take home message for me is this: we need more research. The more recent studies have been fairly lackluster, though intriguing, but we also have this older case series that really makes your head turn. Under no circumstances should patients discontinue current medications and place all of their stock in hawthorn, especially not without supervision from a physician, but we may yet find evidence that hawthorn has an important role to play in hypertension. Stay tuned.
Posted by Unknown

I'm a naturopathic doctor practicing in Baltimore, MD. I see a wide range of conditions, from IBS to ADHD to rheumatoid arthritis. I always focus on individuals, not diseases, and offer the time and attention necessary to treat my patients' unique challenges.
Click here to visit my website. 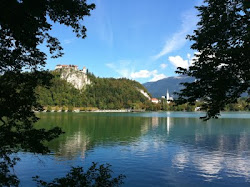 A beautiful place with a history of healing